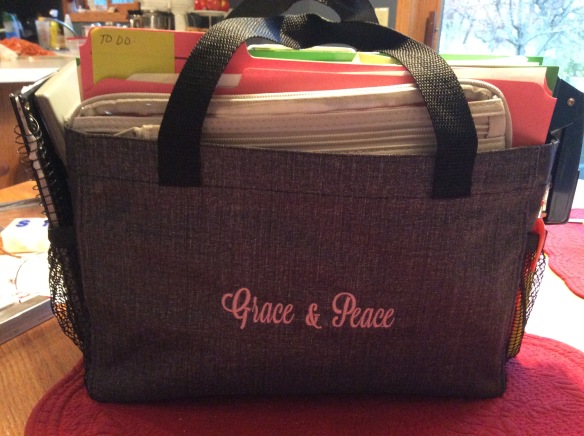 I couldn’t find it. The new year had begun and last year’s calendar was no where to be found! How was I going to look back and see all my accomplishments? It was lost, again. Considering my ‘paper wars’ since suffering a traumatic brain injury, it was perfectly understandable.

During my two day search, I threw away eleven inches of paper. Even with this impromptu purge, there still remained two seven inch deep baskets waiting for . . . Most likely . . . The garbage can. 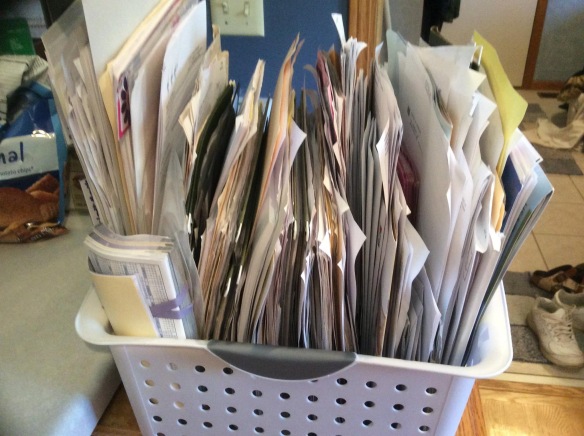 This was the same paper I had moved a month ago!

All I REALLY did was move it around my house from place to place, hoping to find the time to sort it, later. In between special occasions, cleaning, and the urgencies of life, the papers traveled from near my work area at our dining room table to far away in big totes shoved into closets.

No wonder my calendar could not be found. I wasn’t REALLY using it! The only thing distinguishing it from the other papers was it’s spiral binding. It too was randomly entering and exiting different places around my home.

Was this my fate for the coming year as well?

As is often the case after a failed searching expedition, I called upon my memory. And for me, that can be even more chaotic than the paper searching.

I began to think.

How could I have forgotten?

I was going to finish writing my book!

It was at this moment, I questioned if I had indeed lost my calendar at all.

Maybe I ‘lost’ it on purpose to hide from my inevitable look back on the year’s accomplishments, knowing I had failed miserably at something important.

The rotten cherry on the top of the entire disappointment was my failure to make regular posts to my blog for my faithful readers.

The plan had been to launch the book on the ten year anniversary of my Traumatic Brain Injury the next year – which is . . . TODAY!

My book wasn’t done! How did this happen?

The blog was intended to be a place for all my extra stories. I had hoped it would give people a taste of what was to come in the book.

A year of writing, all neatly tucked inside those parameters, adorned with my signature bow of “The Perfect Plan.”

My stomach turned over and I felt that familiar ache of regret and embarrassment with my failure. It was painful to realize I barely noticed the time passing. What was I REALLY doing all those weeks and months?

I had thought about writing.

I had done a ton of organizing, processing, and rearranging chapters.

I even found some missing words on my computer.

All of which were necessary but none of that REALLY mattered if I didn’t reach my goal to finish and launch the book.

Now I felt completely defeated, unmotivated, and like I had disappointed everyone who was anxiously waiting.

I wondered if they would even trust me to come through in the future. Had I failed before even finishing?

I started to feel the disgust of invisible people asking, “How’s the book coming? Are you published yet?”

Then there was the blog. I originally planned to post weekly, then bi-weekly, and finally monthly. I failed at that TOO!

I was overwhelmed. How could I call myself a writer? How could I even suggest such a thing? I wondered if I REALLY had anything to say to anyone.

As I sat completely and utterly deflated, discouraged, and dejected I began to think about those invisible people inside my head. Who were they anyway? And why are they so important that I would listen to them?

DISTRACTION had set-in while I was looking through papers to find my calendar.

Yeah, the ugly cousin of LIES. They both hang around me sometimes, unannounced and most certainly unwelcome. I don’t always notice them right away, but they were back. I needed to find some truth.

The truth about last year is important. Every last second of it. It REALLY is!

It was my real life. It happened. I was there. As I remembered . . . now with my own wits about me . . . I realized why it was important and worth cherishing.

I started a blog last year. ALL. BY. MYSELF! I did it with a brain that has trouble processing and learning new things, especially technology. And, I brought my tribe NINE posts crafted with my own brand of agonizing beauty.

I spent a month sicker than I have ever been in my life. When I could finally make it out of bed, I didn’t tell my doctor how bad it was. I was worried she would admit me to the hospital, so I lied. I was REALLY sick!

I cried for the next month mourning the passing of a life-long college friend. Her smile could break an ugly attitude into a thousand pieces. She had MD. The end came REALLY fast. The day she left, our flowering crab tree peaked in color and as I watched the blossoms fall to the ground I realized how long it would be before I’d see her again.

My son’s moved out within two weeks of each other. Being that kind of Mom was over.

Tearing down their wallpaper and painting over the memories makes you long for more. And, it’s never the same again.

I cried and worried and then I wondered why because we were all so ready – it was time. It was a good thing.

But it was also REALLY sad.

Then, for the rest of the year, I did the thing that wasn’t even on my calendar.

It was the thing that was NEVER on my calendar – ever.

I got out the checkbook (REALLY, it was a MasterCard) and paid for the things that had long been set aside, by me, as just too costly (right now) to have done.

I reversed the 9 year pain pattern in my body by getting the massages I knew would accomplish that for a fraction of the price worker’s compensation had paid for ineffective physical therapy.

I whitened my teeth and finished the post-braces dental work that had gone undone for 40 years.

I got my ears re-pierced and bought a few very nice pairs of earrings because I just wanted to be simple but elegant and that takes a few bucks. (I finally used some of the gift money from my In-laws that had been stashed away for years.) 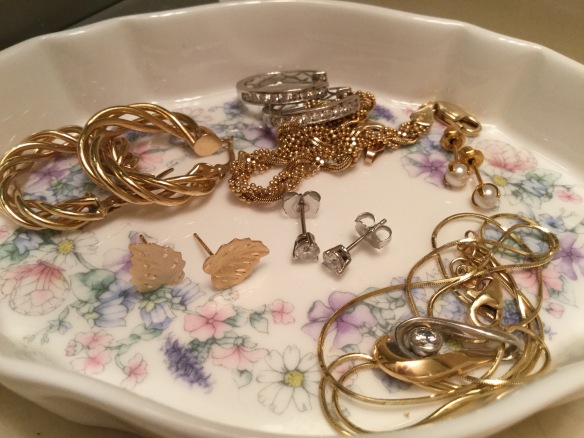 After 30 years of wearing mostly white leather tennis shoes every day, I discovered a brand for my hard-to-fit feet. I heard the average woman has 30 pairs of shoes. I have 8 so I’m now boasting about being ‘below average.’

I became thoroughly immersed in a handbag brand that has brought me dozens of on-line friends and a tribe of over 10K ladies who love beauty of all kinds. I’ve got 8 or so handbags too – they sort of coordinate with my shoes but I don’t care. Not REALLY. I care about the process and the ladies.

(You can read about that journey in my post entitled: The Carry)

And, I released 52 of the 172 pounds of excess fat that resides in my body. I am letting go of the reserves I accumulated and carried over the years. The reserves which enabled me to place everyone and everything above my own worth and value.

I let go of the coping mechanisms that kept me alive through the emotional turmoil of my childhood, the baggage I brought into my marriage, and the codependency that fueled the decisions I had made most of my adult life.

I never needed a calendar to do what I REALLY did last year.

All I needed was myself and Mercy.

10 thoughts on “What I REALLY Did Last Year”